Some people believe that a mysterious creature can be found in the thick, swampy mangroves of southern Florida. A number of people even claim to have seen it. They say it may be related to creatures such as Bigfoot and Yeti. Scientific evidence of its existence has been difficult, if not impossible, to obtain. If, by some chance you find yourself near this sub-tropical area known as The Everglades, you too may encounter the Skunk Ape.

Said to be the cousin of the world-famous bigfoot, the skunk ape has terrified residents of the southern United States and mystified cryptozoologists for decades. In this article, we’ll examine the legend of the skunk ape in detail, focusing on the creature’s mythic origins and tales of its wanderings in the wild. 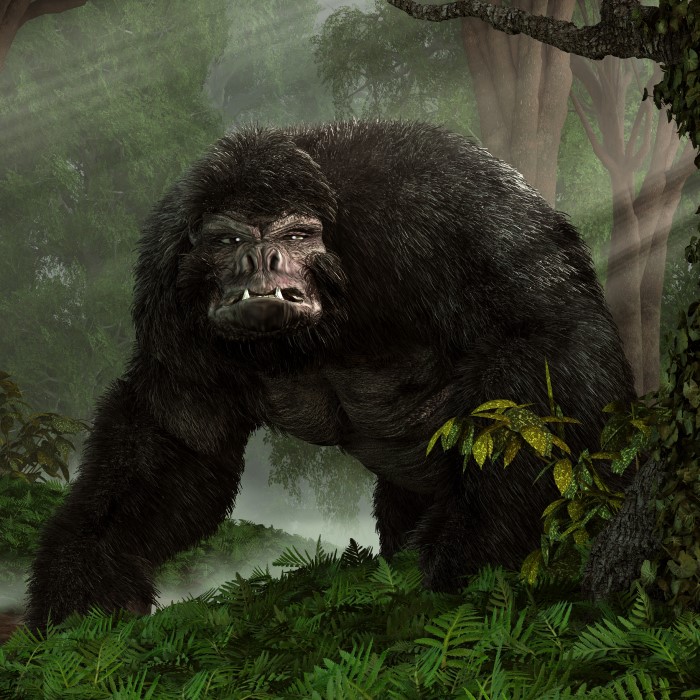 As previously stated, the skunk ape is said to be closely related to its more famous counterpart, bigfoot. Like bigfoot, the skunk ape is described as a large primate. The skunk ape, however, is reputed to have reddish fur as opposed to bigfoot’s brown hues. In ways that are similar to an orangutan, the skunk ape also has longer patches of fur on its shoulders and arms.

In addition to its distinctive fur, the skunk ape is known for its powerful odor, from which it derives its name.

While bigfoot are said to stand as large as 10 feet tall, the skunk ape is a good deal smaller, averaging at around 7 feet in height.

Where did stories of the Skunk Ape Originate?

Reports of large primates inhabiting the woods of the southeastern United States have been prevalent since before Columbus arrived in 1492. The Seminole tribe of Florida called the skunk ape Esti Capcaki and feared the creature for its large size and reputation for devouring men. Some members of the Seminole and Miccosukee tribes still live in the area, and tell stories of large ape-like beings that have been passed down from previous generations. While most of these stories report the creature as being shy and inquisitive, others note its savage ferocity.

Settlers who entered the region in the early 19th Century also told of creatures living in the woods who would stalk any man who dared to enter their territory.

The legend of the skunk ape achieved widespread popularity throughout the United States, and particularly in Florida, in 1957, when a group of hunters had a terrifying encounter with the mythical beast. As the decades rolled on, more and more people exploring the Florida Everglades came forward with tales of encounters with skunk apes. The stories eventually became so popular that the skunk ape is now regarded as the unofficial mascot of the Sunshine State.

Does the Skunk Ape possess any strength or powers?

Unlike other mythical creatures that dwell in the woods, the skunk ape has no magical powers. Nevertheless, the skunk ape does possess several physical abilities that make it ideally suited for its environment.

Like all large primates, the skunk ape is incredibility strong. Additionally, it possesses more intelligence than the average animal. This intelligence has allowed the skunk ape to remain undetected by modern man and mainstream scientists.

What are some sightings of Skunk Apes?

The first recorded sighting likely occurred as far back as 1818, near the small town of Apalachicola, Florida on the Florida Panhandle. Workers in a cotton warehouse reportedly found several baboon-like creatures in a nest behind several cotton bales. The story appeared in the Apalachicola Gazette in July of that year.

In one of the more well-known stories, a group of anthropologists told of a skunk ape descending upon their research camp in 1971 and destroying all of their equipment. The anthropologists reported that the creature stood 7 feet tall and weighed 400 pounds.

In January of 1974, a man named Richard Smith called police early one morning at about 12:30 AM and said that he had struck a large beast nearly 8 feet in height with his car. A number of other reports about a large creature in the area had already been phoned into the police that same night. In addition, a separate motorist called in about 3 hours later and reportedly saw a large creature limping along the same road. An officer responding to this later report may have actually seen something as well. He stated that he saw a large shadowy creature “crashing off into the brush” and it “looked like a man, except it was an extremely large man”.

In 1997, a group of 40 tourists on a bus near Ochopee, Florida famously declared that they had seen the creature walking alongside a road near the backwoods.

Just as the skunk ape fervor was dying down in 2000, a woman living in Myakka, Florida injected new life into the debate over the existence of the creature. The individual, who wished to remain anonymous, sent two photos of the creature to the Sarasota County Sheriff’s Department. The photos, which have since become known as the Myakka Photos, are regarded by cryptozoologists as the best evidence for the existence of the skunk ape. In a quick account attached with the photos, the anonymous woman said that she took the photos in her backyard and that she initially thought it was an escaped orangutan.

Efforts to Identify the Creature

Soon after the tour bus incident in 1997, Floridians became obsessed with finding a way to scientifically prove the existence of the skunk ape. Dozens of woodland explorers descended upon the Everglades, with some emerging with blurry photos of the creature or anecdotes of quick encounters. Though there is no concrete evidence of the skunk ape, there are enough reports to warrant some consideration.

No article about the skunk ape would be complete without mention of Dave Shealy. Dave Shealy claims that he saw one when he was a young child, and also claims to have captured one on film as an adult. Mr. Shealy now operates a gift shop and attraction called the Skunk Ape Research Headquarters in Ochopee, Florida, where visitors can read and hear about the creature and see other large fauna such as alligators and a reticulated python.

The myth of the skunk ape is a powerful legend that has changed many lives and sparked the imagination of the region, country and world. While there remains much debate on what the creature is and if it even exists, its legend makes the world a more interesting place. Through the legend of the skunk ape, we are reminded that there is still much to be learned about nature and our place in the universe.