Not every creature from folklore has an ancient origin. In fact, some of the creatures that capture the public imagination come from recent tales. Take, for example, the chupacabra – a creature that’s become quickly ingrained in the mythology of the American Southwest, but can only trace its origins back twenty-five years to Puerto Rico. This creature might be a relatively recent entry into the records, but nonetheless it is an important addition to the world of the supernatural. 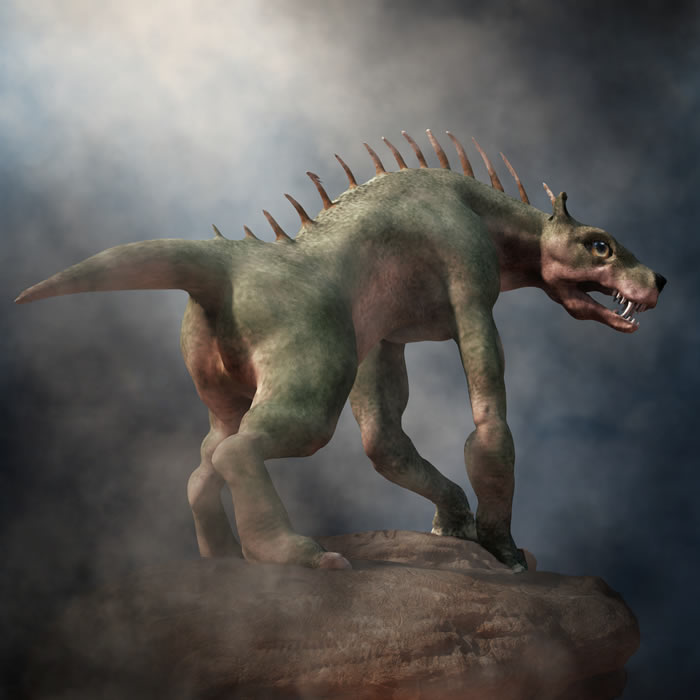 Quick Facts about the Chupacabra

As with most creatures that dominate North American folklore, it’s hard to get a really solid description on exactly what the chupacabra looks like. In most American and Mexican stories, it’s a vaguely canid creature, with a profile that might be the same as a large wolf. Unlike a dog or wolf, though, its most dominant feature is a row of spines that reaches all the way from the nape of its neck to the tip of its tale.

Size is the biggest variable for this creature. In the original stories from Puerto Rico, the chupacabra was usually depicted as around the size of a small bear. In most mainland stories, however, it ranges from the size of a coyote to that of a large wolf. Other features, such as whether or not it has fur, tend to vary both regionally and by the story.

The original version of the chupacabra, however, was quite different. It was not only much more lizard-like, but it was bipedal and hopped like a kangaroo. Oddly, this version of the creature is only cited in the original myths based in Puerto Rico.

The chupacabra doesn’t have any magical or supernatural powers. Instead, it seems to be a folkloric mystery creature, one that conforms to the rules of the natural world but that simply isn’t encountered by human society. The most unusual thing about the chupacabra is how it eats. Unlike most other similar animals, the chupacabra is believed to suck the blood from its victims – most commonly the goats from which it derives its name.

The Puerto Rican stories of the chupacabra only date back to 1996, and they all concern the slaughter of livestock. The original stories feature slaughtered sheep who were drained of their blood, followed soon by similar stories concerning goats.

The stories on the continent follow soon after, with less of an emphasis on blood sucked out of animals and more on the slaughter of livestock. While the stories from Puerto Rico tend to have connections to other monstrous acts, the stories in North America tend to be more focused on natural explanations.

There have been a number of explanations for the chupacabra floated about, some more satisfying than others. The original stories from Puerto Rico, for example, seem to be highly influenced by the design of a monster in a film seen by the first major eyewitness.

The version of the chupacabra in North American folklore, however, does seem to have a very mundane explanation – mange. Dogs suffering from mange not only have the telltale scaly skin and pronounced spine of the chupacabra, but their reliance on hunting livestock seems only natural considering the weakened state of the animal. While many claim that the chupacabra must somehow be its own species, a number of so-called chupacabra corpses have been proven to be dogs, wolves, or coyotes.